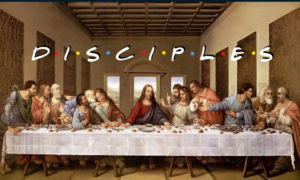 This summer, we will have weekly studies available for each of 12 weeks from May 13 through July 29. Each week, we’ll focus on one of Jesus’ 12 disciples. We’ll look at a short passage involving that disciples (actions, words, attitudes, etc.); we’ll have a short reading putting the passage in context; and we’ll have some discussion/reflection questions that can be contemplated alone or discussed in a group (a youth small group, friends, family, etc.). One of the main questions we’ll be asking is whether what we see from the disciple is “good” (something to be imitated) as we try to be disciples today — and the answers will not always be as easy as we think. This week, we look at the disciple James, son of Alphaeus, who is known only by his relations to relatives, and who just may be the quietest disciple. READ Matthew 10:1-3 (NIV below)

1Jesus called his twelve disciples to him and gave them authority to drive out impure spirits and to heal every disease and sickness.

2 These are the names of the twelve apostles: first, Simon (who is called Peter) and his brother Andrew; James son of Zebedee, and his brother John; 3 Philip and Bartholomew; Thomas and Matthew the tax collector; James son of Alphaeus, and Thaddaeus; 4 Simon the Zealot and Judas Iscariot, who betrayed him.

READ this: I (Jonathan) have one brother, Ben, who is two and a half years older than me, and we did a lot of the same things growing up. I fell victim to the “curse” of the younger sibling — I was used to being identified as “Ben’s little brother.” I know there are younger siblings who resent this kind of identity — perhaps in their desire for individuality they even actively campaign to be so different from their sibling that they could not be associated with them. That’s not how I felt. I was a quiet kid. I wanted to be included and talked to and thought of, but I was never going to speak up and say anything. So when I came into a new group of people who already knew Ben, I wasn’t just a stranger — I already had a connection to them, and that meant a lot to someone who wasn’t going to speak up and make connections on his own. The other benefit I’ve realized more later in life is that I get to benefit from my brother’s awesomeness. When people meet me and say, “So you’re Ben’s brother?”, it’s a positive association. When he worked at a newspaper and the same company wanted to hire me, it was clear they were hoping to get another “little Ben” because they valued him so much. (I still think they were disappointed I didn’t have dreadlocks like he did.) This week, we’re looking at a disciple who we really only know from his relationships to other people. This is another James, but not James the son of Zebedee (who we talked about last week). This James is sometimes called “son of Alphaeus” (Matthew 10:3, Mark 3:18, Luke 6:15), or as a son of Mary (Matthew 27:56, Mark 15:40 and 16:1, Luke 24:10). Some think these may not all be the same person, and it’s further complicated by the fact that Jesus had a brother named James, who some identify with this James, too (as we mentioned last week, James the brother of Jesus is traditionally thought to be the author of the epistle of James in the Bible). Yet there’s one thing true for all these times we read about this “James” (or these “Jameses”) — in each case, we’re introduced to a disciple of Jesus; we’re given an identifying family member; and we never learn anything more. And this James is one of only two disciples for whom we don’t have a spoken word recorded in the gospels. The other is Simon the Zealot, and as we’ll see when we study him soon, the lack of words from him was probably not due to timidity or hesitancy.
So in addition to being differentiated from others just by his family members, this James could likely have been the quietest disciple. We’re thinking this week about who people associate us with as well as when we might want to have the quality of quietness.
ANSWER these questions:
How do people identify you in relation to others? Do people think of you as someone’s child or sibling? If you’ve experienced that, how does it make you feel?Who would you be most proud for people to associate you with? In other words, how would you want to fill in this blank: “There goes (your name), friend/family of (who?)”? Does that person know you feel that way? When’s the last time you can think of something you said that you wish you hadn’t? When do you wish you would have chosen silence over speaking? What are the good things about being “the quiet one” in a group, in general? What are the dangers?
PRAY that God would help you use words when you need to and listen in all other cases, and that you might find the right people to be associated with and known by, and stick with those people.
Disciples: James (son of Alphaeus) — Emerge Remote Lesson June 24
Subscribe
Login
0 Comments
Inline Feedbacks
View all comments
wpDiscuz
0
0
Would love your thoughts, please comment.x
()
x
| Reply